In case you’re unfamiliar with the term, an aphorism is kind of like a proverb. You know, stuff like “patience is a virtue,” “stupid is as stupid does,” and others like that. Here is a list of aphorisms that I wrote: 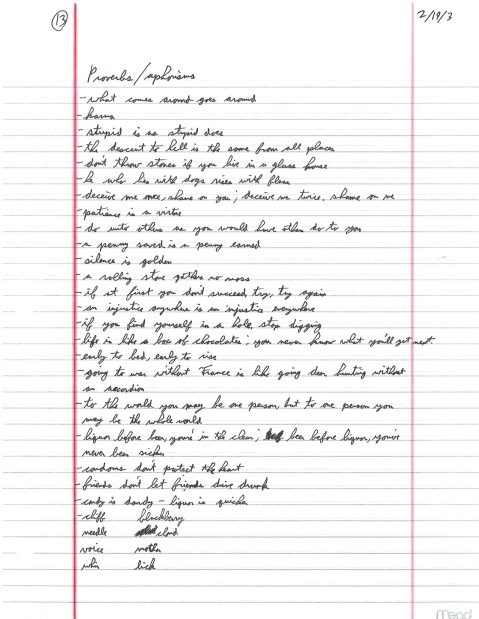 Can you spot the not-so-famous one I included?

I didn’t invent any of these, but here are my favorites:
“Going to war without France is like going deer hunting without an accordion.”
“Condoms don’t protect the heart.”
“Candy is dandy – liquor is quicker.”

And, of course, the one I slipped in from Space Ghost: Coast to Coast. But I’ll leave that one up to YOU to identify (if you can read my high school handwriting, of course).

So if I didn’t create anything original, then why am I posting this? As a precursor to tomorrow’s poetry, of course! Stay tuned.

This post is part of Cody’s “10-Year Idea Reunion” series, in which Cody revisits his creative writing class assignments exactly 10 years after writing them. Learn more about Cody’s Idea Reunion and follow him on WordPress to follow along!

At the top of a page of notes I took on October 27, 2000, in my high school sophomore English class, I decided to draw a terrible (awesome)  picture of Rocksteady from Teenage Mutant Ninja Turtles. Next to it, I wrote:

“He who fights & runs away lives to fight another day!”
-The Shredder, in the Teenage Mutant Ninja Turtles cartoon series; also used by Bebop & Rocksteady, a Warthog & a Rhino, respectively… MUTANT Rhino & Warthog, naturally.

When grading my notes later in the semester (yes, our notes were graded), my teacher wrote “? Not relevant” next the drawing. I… have absolutely no explanation for why I drew that. So let’s move on to the quote immediately following my artistic endeavor:

“You all waited too damn long.”
-My teacher, on something

I like how I was too lazy to even attribute the humorous quote to anything specific. Oh, high school.